The Impact of War on Commercial Real Estate

Adam Gower: What I'd like to start with, if you don't mind, it's kind of a high level overview. What is, in general, the impact of war on commercial real estate in the United States?

John Chang: You know, in general, it doesn't have that big of an effect, usually. Right? Because most of the time the conflicts tend to be small. There's expectations that they're going to be relatively minimal. There's not a huge implication. The difference this time, is that it is a major conflict involving a world power with a lot of different countries lining up on the side. So, this is a far bigger conflict with a lot more issues involved. Normally, we don't have a lot of impact on commercial real estate, but this could be very different.

Adam Gower: And the impact is typically - it's not directly on commercial real estate. It's more the impact on the economy as a whole that is positively related to real estate performance.

John Chang: Yeah, absolutely. So, it's kind of a chain sequence of events, right? So, war creates uncertainty. War can impact different things like, again, in this case with Ukraine, there's a direct impact on the global economy, the financial systems, as well as natural resources. And there's a lot of different natural resources being impacted. We already had problems with supply chains. We were running into those because of COVID. This amplifies all of those. And as a result, it then trickles over into financial policy, fiscal policy, monetary policy, and that drives interest rates, which then impact commercial real estate borrowing. It impacts investors uncertainty. It impacts the flow of capital in and out of the stock market and in and out of bonds. So, it has a lot of different ways that it touches on commercial real estate along the fringes. But it also does drive finances and money into commercial real estate as well, because real estate is a real asset. It's a hard asset. And that's one of the places people like to go when there's uncertainty. So, it's a variety of effects all across the entire economy and across the entire industry.

One of the reasons it is so difficult to find information about the impact of war on commercial real estate is that the popular definition of war has changed over time. Traditionally, the term war has conjured images of hand-to-hand combat and brute military force. As technology evolves, however, the spectrum of “war” has grown wider. Now, we have to be as equally concerned, if not more so, about cyber attacks than we do physical attacks.

The Impact of “Traditional” War on Commercial Real Estate

Historically, wars such as these required a shift in economic production. Rather than investing in traditional goods and services, the American economy ramped up production of wartime supplies. Resources were fundamentally and disproportionately redirected from normal economic activity into the war effort. As a result, there was less home building and this is reflected in new home starts during the World Wars I and II. There was also less institutional-grade investment into new office buildings, retail centers, hotels, etc.

Immediately following WWII, real estate demand surged as GIs returned home, eager to settle down and build their families. At the same time, there was a dramatic expansion in civilian employment that led to increased demand for commercial real estate. Across the board, real estate values rose.

Globally, military tactics have since evolved. There is less risk of large-scale, international combat. Instead, isolated but impactful physical attacks have become the norm. This would include attacks such as that experienced on 9/11 or the bombing of oil fields in the Middle East. Attacks such as these can send shock waves through the commercial real estate market.

Let’s consider the terrorist attack on the World Trade Center on 9/11. In the short term, this disrupted economic activity in Manhattan and had an impact on office vacancy rates. Longer-term, it caused some investors to pause before investing in trophy assets in major markets, as these were perceived as potential targets for future attacks. In some cases, it also caused insurance premiums to rise. Higher insurance premiums dragged down the pro forma, leading to some modest real estate devaluation from an owner/tenants’ perspective.

Now let’s consider how a physical impact on something like an oil field in the Middle East has an impact on commercial real estate.

Truth be told, a minor disruption in oil production will not have a significant impact on the U.S. economy, especially now that alternative energy has become more commonplace. That said, attacks such as these can otherwise create volatility in equity markets. Volatility in the equity markets can cause stock prices to fall, resulting in a downward adjustment in wealth. In other words, more economic volatility can mean less wealth, and less wealth means less investment to keep the commercial real estate wheels churning. During periods of instability, many investors pull their money out of commercial real estate in favor of “safer” investments such as bonds.

Related: Podcast with John Chang at Marcus and Millichap on the impact of the Ukraine war on commercial real estate.

The Impact of Cyber Attacks on Commercial Real Estate

A third type of “war” to consider is cyber warfare. We (thankfully) have not experienced cyber warfare to a degree (yet or that we’ve either noticed or acknowledged) that has impacted commercial real estate. Yet the threat of cyber attacks remains high and increasingly, very real.

A cyber attack could have crippling impacts on the economy. Think, for example, of how many people rely on the Internet, their cell phones and computers to operate their day-to-day business. Consider the impacts of an attack on the Social Security Administration, where people are no longer able to receive their monthly benefits. Likewise, an impact on banking institutions could halt any and all lending necessary to complete commercial real estate transactions. Full-fledged cyber warfare could be devastating to the economy.

This is why so many corporations are investing heavily in backup systems, cloud storage, generators and the like. Redundancies are being built into all major systems to ensure companies can continue with business as usual in the event of a cyber-attack – and this itself presents commercial real estate investment opportunities for facilities housing these kind of backup systems.

Adam Gower: So, rising interest rates. Let's talk about that, just for a moment. 25 basis points, but another 6 of them this year, projected. So now we're talking about 150 basis points against... Is that right?

John Chang: One, plus six more.

Adam Gower: Right. One plus six more, exactly. You know what they say? There are two types of real estate, three types of real estate professional, those that can count and those that can't. 1.75%. That's enormous. I mean, that's doubling. Over doubling what the basis is now. So, it only seems very small because it's only 25 basis points. But, as a multiple of what there is right now, it's absolutely ginormous. What do you think the impact of that could be on commercial real estate when there's so much activity and so much liquidity in the market and there has been up until now.

John Chang: Yes, absolutely. First of all, it's 175 if they're all 25 basis point increases.

John Chang: Some of them could be 50s. Right? So it's going to be at least 175. And right now, the 10-year Treasury is just over 2%, 2.1, 2.2, depending on the day and the time. So, yeah, we could be doubling the interest rates over the course of the year. Now, the Fed is responding to the highest inflation we've seen in 40 years. It's far more entrenched than they had originally broadcast. They kept saying transient, transient, transient. And then they decided that transient probably wasn't correct. And now they're still saying that they think the inflation is going to go away by the second half of this year. Are going to come down dramatically. I really question that personally. But, what is the effect of raising rates at least 175 basis points? We recently did a survey of investors and we said, okay, if interest rates go up by 50 basis points, are you going to change your buying activity? And really, at 50 basis points, very few people cared. I think it was about 6% said, yeah, I'll reduce my purchasing. We said, okay, what about if it's 100 basis points? And then 19% said, yeah, I would probably reduce it. But again, in the global perspective, that's not very big. Once you get to 150 basis points. Now it tipped. 46% - almost half of the buyers out there say, yeah, I'm going to slow it down. So, we know that somewhere around 150 basis points is the trigger point - is the tipping point in investor activity.

John Chang: And so, by the end of this year, we may be at that point. Now, there is a ton of capital. Real estate - it tends to be a pretty good inflation hedge. Real estate is a good place to park capital during times of uncertainty. It is a good place to park capital when there's volatility. So, you have these two forces that are battling. On one hand, you have very low cap rates. Interest rates rise, you get a yield compression and actually, you could end up upside down in your first year of operations, depending on your cost of capital and how much leverage you use. So, this is on one side. On the other side is, it's really one of the best places to put your capital. So, I anticipate the first half of this year is going to be very active, very strong. We see a lot of activity because it's going to take time for the Fed to move those rates up and they're not going to do it all in one fell swoop. They're going to do it, a little bit at a time, every couple of months. They're going to hit it again and again and again. And so, by the end of the year, this will likely see a slowdown. Now, there's a lot of moving parts in there, right? If inflation is still high, if we see more uncertainty in the stock market, we see money coming out of the stock market, some of that's going to go into real estate. So it could honestly go either way.

• Those who were once considering buying real estate might put their plans to do so on hold until the economy improves.

• Travel and tourism slow when people have less discretionary income to spend.

• Travel and tourism will typically slow in regions where there is ongoing conflict (e.g., Turkey or the Middle East).

• Rising oil prices (think: oil shock of 1973 where prices doubled, even tripled) may influence someone’s decision about where to work or live, particularly if it results less dependence on a personal automobile.

Conversely, when economic conditions become particularly dire, the Federal Reserve Bank will typically lower interest rates. A low interest rate environment can make owning real estate more affordable, and therefore, can cause an uptick in CRE investment activity. The U.S. has been in a low interest rate environment since the end of the 2008-2010 Great Recession, leading some to wonder how much lower interest rates could maneuver. In any event, it is important to understand how monetary policy during a time of war can impact commercial real estate. 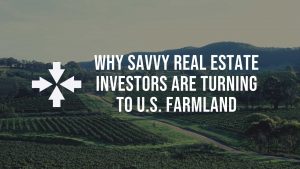 Why Savvy Real Estate Investors are Turning to U.S. Farmland