201 Will the Crowd Fund the Next Generation of Retail?


... looks at what has been going on in retail over the past decade or two.  He discovers that, while a lot of the mind share in the industry is focused on the effect of e-retail, more important than e-retail is the rise of the warehouse club and super center format size. While e-retail has, of course, had a great impact on retail, on several dimensions the warehouse club and super center has even more so moved the needle on the way that retail looks, and how stores are configured, since the year 2000.   But even these large boxes may eventually fade.  What will take their place, and how will they get financed?

Tug of War Between e-Commerce and the Big Box Store

Economists are reluctant to make predictions, not exactly having a stellar reputation for predicting the future. But having some fun with the data, Syverson looked at the penetration of e-retailing and in various product categories and projected them out into the future.  Some that you wouldn't be surprised about are essentially dominated or close to dominated by e-retailing.  But some, drugs, health, and beauty, and food and beverages are two that are not.  These are both massively large sectors in terms of their share of retail sales – somewhere in the neighborhood of $400 billion dollars of sales for drugs, health, and $700 billion for food and beverages in the U.S.  And in both of these sectors there is still a huge chunk of retail sales – there is very little relative penetration of e-commerce in either of those two sectors.

Some factors like regulatory restrictions on prescription drugs distribution is going to set limitations.  However, for the typical CVS or Walgreens in terms of revenue share, things that aren't prescription pharma is still a significant proportion for those stores.  So while there remains a continuation of the development of bricks and mortar building activity going on, to some the bulk of the warehouse club and Supercenter build out has happened already – and consequently you might expect that to slow down and for e-commerce to pick up some.

Given enough time, there is likely to be the full penetration of e-commerce, with some upper bound, for example in prescription drugs that might never become fully e-commerce, and there might be other reasons in other product classes where it is never going to get to one hundred percent.  The predictions in the paper are, therefore, quite bold in saying that various categories could possibly even get to ninety, ninety-five, or one hundred percent.

The Crowd Will Finance the Future Local Store

In the long run, e-commerce will likely replace the base currently supplied by a lot of the big boxes, and what will be left will be a throwback to the small niche type retail operations that used to be the typical thing several decades ago.  To survive in a retail world where most retail is e-commerce stores are going to have to be specialized in something obviously that e-commerce cannot deliver. It will either be some particular product category that has attributes that do not work well with e-commerce, perhaps something where tactility is hugely important and where the customer actually needs to hold the thing in their hand or look at it physically before they are willing to purchase.  Or maybe it is simply this need for personal service from someone you know, where not only do you want a salesperson there to walk you through how the product works, but also because you simply want to support their business. Maybe you invested $1,000 in the business directly; maybe you invested $10,000 in building the store is situated in.

The High Street of Tomorrow

And the future of the high street?  Retail will be dominated by small, niche shops that provide a social and highly localized service or product.  This requires that demand will be sufficient to support the local niche store once again as it did in the past.  But how will this be financed; how will these kinds of stores, or the developers that build the buildings in which the reside, finance their existence?  Well, that is precisely where crowd funded real estate will facilitate this change.  Real estate is fundamentally a local phenomenon.  The reason we have the large box stores and chains is because institutional underwriting likes the copy and paste efficiencies of scale.  Not so the crowd.  The crowd as a gathering of neighbors wants to support itself, locally and financially, and it is the crowd that will fund the next generation of retail – the small, niche, local product, owned by people who live locally and who support their community by sitting on local associations and councils.  As institutional capital has institutionalized our lives in every aspect, it will be we the people, we the crowd that will fund the next generation of retail.  And it will look a lot like it did a generation or two ago when you knew the shopkeeper and patronized the store because her kids went to the same school as do yours. 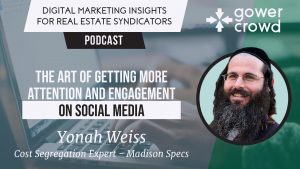