What is the Best Hold Period for a Real Estate Investment?

Many of the most common questions that I receive from those learning the ropes of the commercial real estate business have to do with timing. Typically, it has to do with when to get in the market- and when to get out. I'd like to take this opportunity to explore an aspect of the latter category and answer the question: what is the optimal minimum investment period for real estate investing?

Better Off in the Long Run

Most data regarding the optimal investment period for real estate points to the fact that you're better off investing in real estate for at least ten years, with better returns the longer you hold. There are two primary ways of looking at the question. The first involves looking at the growth patterns of the American economy. Historically, the United States grows 8 1/2 years out of every decade. This means that commercial real estate demand generally grows about every 8 1/2 out of 10 years, mirroring the financial picture of the economy as a whole.

So you're looking at climbing demand for most of the time, followed by about a year and a half of declines- which can often be steep. A prime example of this is the 2008-09 housing crisis. Prices took a substantial dive for a few years, and ended up bouncing back for a prolonged period, in many areas of the country home prices have continued to grow unabated since the dark days of the crash.

You might find little pockets of the country that didn't grow, and yes, you can find segments that didn't fully recover, but you can also find those that more than fully recovered. You're betting, then, on this pattern of growth, which has continued to occur.

The other piece of the puzzle that you're betting on is that supply doesn't go crazy. If you grow 10 percent, the economy grows 10 percent then all is well, but if you add 100 percent to the real estate stock, that's not going to be ideal. Realistically the economy can only produce so much, and if supply far outpaces demand, you will not see returns at the level you would see when supply more or less grows around the same rate as real economic activity. This introduces a political/social factor like the wars raging between YIMBYs and NIMBYs in places from NYC to the Bay Area.

That said, there are even real estate types like farmland that are actually experiencing declines in supply as the combined effects of urbanization and, in the West, drought, shrink arable land supplies even as demand from a growing population increases.

As long as you stay in the game, your chances of a total loss investing in real estate are slim. However, from my experience, which is also backed up by the data, there is one main way most people get into trouble with their commercial real estate investments – by taking on too much debt. Even if the underlying investment is not all that risky, the addition of too much debt can leave investors vulnerable to downturns- and if they can't make it to the other end of the tunnel, they often face substantial losses.

If you look back, most of the people who got squeezed out of their properties during the various down periods, at least in my lifetime, were right in terms of timing- they just were wrong in their capital structure. People I've interacted with and even worked with have chosen the right buildings in the right areas, with plenty of tenant demand. Their only problem was their inability to stick around in the long run, as well as their failure to avoid foreclosure or a fire-sale of the property due to changing economic tides.

In many ways, commercial real estate investments should be thought of as a marathon, not a sprint, the more you pace yourself and think of the big picture, the more likely you are to see success in your portfolio.

Farmland Outperforms Other Commercial RE During 10-Year+ Holds

Compared to other categories of commercial real estate, like retail, industrial properties, or multifamily apartment buildings, farmland has the potential to see higher gains over a given ten-year period, even more than multifamily which itself experiences year on year gains somewhere around half a percent higher than other property types. With the power of compound interest taken over a decade, that adds up to a pretty substantial advantage for multifamily properties.

Farmland not only outperforms in terms of average yearly gains, but the distribution of their 10-year returns has also historically been advantageous for investors. It's one thing for an investor to get an 8 or 9 percent return, but half of the time, they're negative- and quite another to see an 8 percent return and almost no negative returns during that decade window. Farmland, which can be insured against less productive years, performs best because everyone needs to eat (even more than they need housing) and demand is not as volatile as a result.

Indeed, demand for food goes up during recessions as everyone stays at home and eats more! In fact, there are multiple reasons why farmland, particularly in The Oasis of the California Central Valley is the best option for long term real estate investing. These include:

In the world of commercial real estate, there is money to be made within any timeframe- from days to decades. However, on average, by holding for ten years or more, investors can increase their returns while decreasing volatility and risk. Working with farmland properties can also reduce risk and increase gains for investors, primarily due to their supply/demand characteristics and countercyclical recessionary qualities.

If you want to build your wealth and earn passive income from real estate investing and are looking at deals on marketplace platforms or through developers online, then I recommend you start by the 8 Key Financial terms so you can understand every deal you look at.
The 8 Financial Keys are not only a great way to get started, they are also essential to understanding how you’ll make money in any real estate deal.
You’ll learn the most important financial concepts you need to know in real estate investing that apply to every type of real estate no matter the asset class (office, industrial, residential, hospitality, retail).

If you’ve got some online real estate investments under your belt already and are beginning to receive passive income checks each month, or have been paid off with profit – or (hopefully not) are finding that some deals are not quite panning out the way you expected, then check out this page for a wealth of free resources.
Here I cover everything from beginner all the way to very advanced real estate concepts.
You’ll find podcasts with developers, researchers, professors and other industry experts, detailed articles, and lots of videos, both short and long that are all easily searchable and totally free.

I am not shy about being straightforward about real estate investing; it is exciting, lucrative, and can help you build wealth and income as part of your investment portfolio, but it is not without its risks.
As an advanced investor you know this already, so I’ve put together a webinar for you that guides you through one of the most important components of real estate investing: Real Estate Contracts – reading between the lines.
This is advanced learning and based off conversations I had with three of the top real estate attorneys in the country, combined with my own personal experience. Access it here; it could be the most important webcast you watch all year.

7 Ways You Can Invest in Commercial Real Estate Online 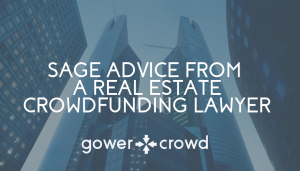 A Primer on How to Utilize Opportunity Zones