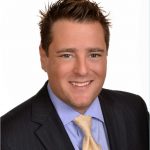 On today's episode, I welcome the founder of Ejudicate, Inc. and Partner/shareholder at Buchalter APC, Richard Ormond.

Today you are going to hear about potential real estate investment opportunities that may emerge in the wake of COVID-19.

Richard and I met back in 2008 during the depths of the last downturn and today you'll hear us dust off some of the terms we used at that time: receivership, restructuring and turnarounds.

Importantly, you'll also find out how you can help get our country back on the road to recovery while making money doing it.

Understanding How COVID-19 and the CARES Act Will Impact Receiverships

Richard Ormond: It's happening that quickly because there's huge anticipation, on the parts of lenders, that they're already getting contacted by the borrowers, that there is going to be a problem. And there are certain property types, CMBS, commercial real estate, especially, where if your tenant stops paying, you can't afford the mortgage anymore. Now, there are government moratoriums, through the CARES Act, and everything else that have been put in place for certain types of properties. But it's not a blanket on all types of real estate. Most commercial real estate is going to fall out of that other than residential-related real estate, like multi-tenant things like that. But a lot of business real estate is, right now, potentially going to go belly up. So you have lenders that...

Adam Gower: Hang on a sec. Yes, I get that so, but, is there no, gosh, I'm not really sure how to describe it, but these, for no fault of their own, across the entire country, all these entities or these businesses, this type of real estate will inevitably fall into default. And is it that the lenders have no choice? Regulations mandate that they must affect certain processes to recover against those defaulted loans. Is that right? I mean, there's no moratorium on that?

Richard Ormond: That is absolutely correct. And you're going to have some conflicts because there's going to be interpretations of this new CARES Act that says, well, we shouldn't go after these folks and the left hand and the right hand are not going to be communicating. And you have very strict regulations, post-Great Recession, post 2008, 2009, that say, that a bank, once it has a distressed asset, has to take certain steps to eventually move it off of its books.

Richard Ormond: So, they are going to have a lot of pressure from that side, having them work through these distressed assets and they're going to have pushback from borrowers with counter-suit, these class actions and everything else.

Related: How Coronavirus is impacting the housing market

Richard Ormond: In the end, banks are great lobbyists. Banks are, in essence, when we leverage this economy and when we protect our economy, first infusion of cash that we give is always to the lenders because they have the best mechanism to getting money out onto the system. So, there is a symbiotic relationship between the federal government, the state government and the banks that that they will acquiesce to their needs over time. So there may be a short term outcry. But the long term effect will always be that the banks have to work through their bad assets. So while COVID-19 is on the front page of the paper, behind the scenes, you're going to see banks gearing up to figure out exactly what their priority enforcements are going to be and then what their secondary enforcements are going to be, so on and so forth. One of the interesting things that I've gotten a lot of inquiries about is from bankers asking for referrals to people that understand distressed assets. So they're already anticipating this situation. A lot of the folks that I knew that work in distressed assets, now 10 years ago, 11 years ago in the last downturn, moved out of distressed assets 3 or 4 years later.

Adam Gower: Because there weren't any.

Richard Ormond: There weren't. Right? And so there is a dearth of experience right now, at the banks, dealing with, not just distressed assets, but the quantity of distressed assets that this type of economy can present. Now, let's look at L.A., for example, with the moratorium on rents on multifamily. Well there's a moratorium, but those rents still, the way the rules are written, have to be paid back within a year for unpaid rent. So there's a lot of confusion in the marketplace. I think the front page of the L.A. Times has an article today. But at some point, those landlords will have to pay mortgages. And if they don't, those banks are going to have to enforce those loans.

How Banks Will Prioritize Distressed Properties During COVID-19

Adam Gower: Isn't the fundamental issue here, the economy is strong, but it's been shut down. So these, yes, I mean they're distressed, but nevertheless, the banks still have no option. Right?

Richard Ormond: That's right. So the banks, after 2008, 2009, under the Volcker rules and under the stress test rules, something called the Texas ratio, have to have a certain number of assets and cash on hand at all times. And if they don't meet this magic equation, they get put onto different levels of distress to the point where if they get to a certain tipping point, the government will shut them down. And you can actually Google "Texas ratio" and see exactly where different banks...

Adam Gower: Every bank is. And so, is that ratio has, I'm not sure which direction it goes, but it's, today banks are much better capitalized than they were in the pre-2008 era to be able to carry this.

Adam Gower: Further, before they run into federal issues.

Richard Ormond: There's a couple of reasons why. One is, is that they're actually better at managing cash reserves and asset reserves. But the other reason is this. Is that because they move quickly through bad assets. They no longer hold bad assets as long as they used to. And so, going back to what you're were saying earlier, in essence, they're mandated to either get them off their books, refinance them, or the one thing that I think is a great opportunity if you're sitting on dry powder, like I mentioned earlier, is to buy the paper.

Adam Gower: Yeah, the notes, I was going to ask you that.

Richard Ormond: Is to sell those notes and sell them to people that that can maybe pay 60, 70, 80 cents on the dollar or maybe less and they go through and they're the ones that go and foreclose or put a receivership.

Adam Gower: That is exactly what happened during the last downturn as you know, that's how you and I met. I transacted over a billion dollars of those notes.

Adam Gower: But the issue now, is the, yes banks are better off because they get them off the books quickly or more quickly. OK, I get that. But, this is a tsunami, right? This isn't just ones and twosies. Every single loan, potentially, on a bank's books could be headed this way or a lot of them, right?

Richard Ormond: Well a lot of them. I think that there'll be a priority list, at some point, that will come out either mandated by the government or created by the banks themselves, where optics for banks do matter. So, Wells Fargo is still reeling from the silly opening up multiple accounts scandal that they had a couple of years ago. Otherwise, though, Wells Fargo is a very sound, very well run bank. Other than this consumer nightmare that they ended up in, that they're dealing with the optics now. So banks learned their lesson and they're not going to want to foreclose on small families. They're going to probably prioritize the least optically bad property to foreclose on, industrialized warehousing, commercial space, those types of things. And eventually, they'll be forced to work their way down, all the way to the homeowner.

Adam Gower: Well that's right. But you know, but there's a difference, though, I think now is that the, the only thing I recall that was optically very bad was foreclosing on families and kicking them out.

Adam Gower: Yes, but any kind of commercial real estate was, it was, they had to do it right? I mean, that's what I worked through, you know, intensively last time.

Richard Ormond: The other options are an assignment for benefit of creditors, which I actually think is a fantastic tool, where you actually take the assets of the company and put them in the hands of a trustee, and that trustee can negotiate the value of the assets versus the obligations out there. And that's an insolvency tool that works really, really well. You also have the insolvency tool of a corporate dissolution. If you look at the California Corporations Code or the Delaware Corporations Code and most operating agreements, they have an orderly dissolution process already set up in the law or in their documentation or both. And so you have these avenues that you can use. And usually, if you are able to get all the significant creditors in a room, in a proverbial room, you have these tools available to you to say, look, in this situation, in a Chapter 11, you're going to get fifteen cents on the dollar. In an ABC, you're going to get 17 cents on the dollar and a corporate dissolution, you're going to get 8 cents on the dollar. Here, we're offering you 20 cents on the dollar so you're going to end up doing way better dealing with our proposed restructuring than you will in a bankruptcy or an ABC or dissolution. So pick your poison because these are the options that we have.

Adam Gower: This is a discussion you would have, in a turnaround with creditors, but not necessarily with banks, right?

Richard Ormond: Not necessarily with banks, although it depends on if the bank secured or not secured because banks have secured lines and unsecured lines. A secured lender always holds the most leverage.

Richard Ormond: But that leverage also means that they may have to take over that asset by credit bidding, at a foreclosure, and they may not want to. And then that takes us full circle back to the beginning of the conversation, which is, if they don't want to do that, then maybe a receiver is their best option in that regard.

Adam Gower: Credit bidding, just for those who don't know, means that at a foreclosure auction they actually have to bid, well, they don't have to, but it makes sense to bid the full amount of the indebtedness.

Richard Ormond: That's right. And we'd actually advise banks to start lower than the full indebtedness and bid up, because in a lot of instances you have personal guarantees and the personal guarantee is offset by the amount that the bank actually pays for the asset because that becomes the fair market value of that asset. And it's not an exact science, but that's typically how that math would work out. So if you're owed a million dollars, you credit at half a million, you still have half a million dollars that you can go after guarantors for.

330 Matt Ackerson, Founder of Autogrow.co & Master of the Sales Funnel 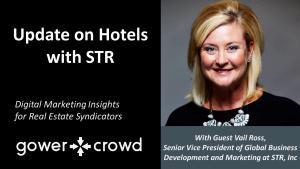