021 For Sale By Fee Agent Wins

... compares how For-Sale-By-Fee agents perform relative to their traditional counterparts, the fully commissioned home sale agent. The results were unexpected: The for-sale-by-fee agent sells for a higher price, in less time, and at a significantly lower cost to the Seller.

Professor Siegmann's research examined the role of the real estate agent in the house prices transaction, and compared the for-sale-by-fee agent, the new generation of agent that has risen since the advent of the internet, with the performance of the traditional commissioned agent.  In the Netherlands, where the study was conducted, commission rates for an agent selling a home is between 1.5% to 2%.  This compares with an average of around 5.5% in the United States.

In fact, commission rates in the United States are among some of the highest in the world, and, unlike the United States, most countries have seen significant drops in real estate commissions in the last 15 years or so.  The lowest in the world are in Northern Europe at around 1.7%, and the highest is in Mexico at 7.5%.  For those countries that have seen drops in commission rates, the average decline has been 34%.  That there has been no significant change in the US gives pause for thought:  Why is there such pricing uniformity among ostensibly competing agents?

What Value Does the Commissioned Agent Bring

Before the internet everyone needed an agent to buy a house and an agent to sell the house.  Agents maintained exclusive access to the multiple listing service and so were the gatekeepers for sellers to a market of buyers, and to buyers who wanted to see what was available to buy.  However, since the advent of the internet, buyers and sellers now have full access to detailed information about all the houses that are available on the market, and yet sellers are still paying, on average 5.5% to agents who are erstwhile intermediaries.  This begs the question that, if information is freely available to everyone, ‘what is the use of an agent?’   The former role of the agent was to match buyers and sellers by providing access to a proprietary data network to each side of the transaction, but now the network itself provides direct access for buyers with seller and vice versa.

For Sale By Fee (FSBF)

The for-sale-by-fee agents in this study involved the Seller in showing their house rather than the agent on the principle that the owner is, presumably, the best person to show the house because they know the house better than anyone else.  This model of for-sale-by-fee agent emerged once the availability of information became more widespread on the internet.  The for-sale-by-fee agent can offer considerably lower fees than the commissioned agent because, by taking the showings from the agent services, a time consuming component of the agent task is eliminated.  In addition, relative to the homeowner, the agent is not as good at showing the home because, simply stated, they do not know as much as the agent.

‘This is really remarkable because it means that they are cheaper and better’.  For-sale-by-fee agents do better than commissioned agents irrespective of whether it is a cheap house or an expensive house, it does not depend on whether a home is in a rural area or in the city, does not matter if it is for houses that typically take a long time to sell or a short time to sell.  Having a for-sale-by-fee agent, where you do the showings to buyers yourself, will give you a better result – you will sell for more, in less time, and it will cost you considerably less to do it.

Simple Conclusion:  For-sale-by-fee brokers, when you do the showings yourself, do better than traditional commissioned brokers.  Period.

What is the Explanation For This?

There are two possible reasons.  One is that the homeowner knows much more about their house than an agent who may be juggling multiple homes at once.  The agent cannot know the details of a house as well as the seller does, and this kind of personal information about a home is of value to a buyer.  This information could include things like when it was renovated, which contractor did the job, how is the neighborhood and other similarly intimate insights into the home.

The other reason is that inherent in the commissioned agent’s fee structure is the disincentive to prolong a sale to squeeze out a higher price. If an offer comes in that is lower than asking price it is in the commissioned agent’s best interest to recommend the sale because the incremental commission earned from rejecting such an offer and seeking another, higher priced, buyer is not worth the effort.  This is a similar theme as we have seen evidenced in other research.  If the open houses and showings are managed by the agent but left to the seller to conduct, that additional layer of time consuming labor is removed enhancing the for-sale-by-fee agent’s willingness to prolong a sale in pursuit of a better result for the seller.

Siegmann and his co-authors pondered whether these results were measuring something that they could not see; something else other than the variables they were considering.  What they conclude is that there are ‘smart sellers of houses’ who are very comfortable with showing people around and making sure that their house gets sold.  It also shows that the added value of professional agent is not that high; there are enough people who can do it themselves.

Applicability to the U.S. Market

There are many studies, some covered already in this podcast series, and some coming up, that find similar results here in the US.  The overall picture is a puzzle; why is it, other than by tacit collusion, that agents in the US all charge the same commissions and yet claim to compete.  This is especially true in the millennial internet age where it is very easy to put pictures up online to show your house and provide direct access to buyers who can search freely and without the need of an agent.  Perhaps it is because the agent realizes that as soon as they start competing on price, their business is over.

What is being seen in the European market is that agents are beginning to offer more creative ways to advertise their services and to structure their fees. There are those who charge a flat fee, and who offer a modular service, like photography upgrades, or staging advice.  In other words, the market is evolving such that sellers are paying for the actual services they are getting and not just for someone to be in the middle.

It is only a matter of time before these models start to dominate the landscape here in the U.S. 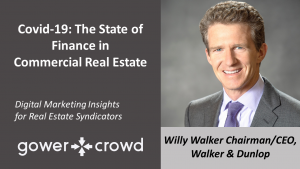 Last Updated on June 22, 2020 by Dr. Adam Gower FREE TRAINING What is Real Estate Crowdfunding? Learn how to build wealth and earn passive income in real estate while…