My background is I've been in real estate since I graduated, since college. Being at Carlton, this is only my second job I've ever had. My first job, I worked for Prudential, when they had a realty group; when they used to own real estate. I was involved in the principal business of real estate at Prudential, and then I did mortgage loans for Prudential for about four years.

Then I came to Carlton and I've been here almost 20 years. Pretty much what I've been doing at Carlton is really focused on raising JV equity and debt for real estate deals; typically on the larger side of deals. It's hotels, office buildings, recapitalizations, like partner-buyout deals, developments. You pretty much name it, we've done it over the past 20 years. Like I said, typically, on the larger side, that's our thing, but we do do smaller deals also. For us, it's the same amount of work to do a big deal than it is a smaller deal so we really do the bigger deals.

Howard started Carlton. Howard's now passed away but I'm running things now. It originally was started as an auction company in '91. We're doing a lot with the RTC, and loan-sales-backed REOs and whatnot for the banks in the early 90s.

Then, in '98, Carlton sort of changed its focus to doing JV equity along with the debt because, at that time, Carlton realized that what the world didn't need was another mortgage broker. We had to figure out a way to make us a little different to everyone else. In '98 is when we changed the focus to JV equity, and it's when I came on board.

Throughout those years, I've been pretty much doing JV equity for trophy deals, like we did the recap of the General Motors Building for Harry Macklowe. We recapitalized Sears Tower, now called Willis Tower, for the owners, who, before they sold it to Blackstone, because Blackstone owns it now. We brought in equity for our clients to buy the Bank of America Tower, at San Francisco.

Then, 18 months later, we brought in a buyer of the building to buy it from them, who happened to be Trump along with his Chinese investors. They still own that building, as far as I know. It was a 1031 exchange that they did. We brought them in to recap, or sell that deal, so to speak. That's sort of how I got involved in what we do, but, like I said, our focus is JV equity.

We bring in someone to do all the equity. What they are is they're like the entire LP. They're joint venture partners in a particular deal. They're buying an interest into a real estate deal. Our sponsor puts in 10 to 20 percent of the equity. After certain returns they get a promote. The LP investor is rewarding them for doing a good job and meeting their pro forma and doing all the day-to-day work. Everyone's happy because everyone makes the return that they want.

We do have a crowdfunding platform where it is individual investor equity, where they do put in $250,000 or so, per each. We tend not to focus on the $5,000 to $10,000, or $20,000 per person investors, on the crowdfunding site. Typically, it's 250, and more. That said, though, we probably have done three, or four deals, where we raise for example, I did a $55 million hotel deal/portfolio, in North Carolina, in Charlotte, and the Raleigh area, last year. We brought in investors from the crowdfunding site.

For us, it's still not big enough. Until we can get to a point, where we have to raise substantial amounts of money, we found that it's become too cumbersome unless you're a shop that manufacturers deals every day and you raise the money where it's like a manufacturing line. It's probably easier to do. For us, we focus on each deal and it's hard to raise $5 million for a deal and make any money. That's not our focus. Now, we've sort of gone back to focusing more on raising equity individually. We never stopped with it actually but we focused less on the crowdfundingthan we were two years ago for example.

We also bring the debt along with the equity. We still do the debt; people rarely come to us just to do a loan. They come to us; they want the equity and the debt comes along with doing the deal. We basically raise the entire capital stack aside from what the sponsor puts in himself.

We tried crowdfunding because they changed the laws, so, basically when the Jobs Act happened it opened it up for a lot of investors and websites. It was more of a technology aspect to have individuals to invest more into real estate easier. We thought it could've been an opportunity and it is an opportunity for some groups. Some of these crowdfunding groups are very successful in doing this, but that's all they do 100 percent. They don't have it as a side business.

For us it's more of a side business and to really make it successful you had to put a lot of time and effort into it which, for us, as Carlton, didn’t make sense. We were making lots of money doing what we did before. It didn't make sense to put that on hold; stop raising $100 million of equity for a big deal and start raising $2 million for a small deal. Even though you can do it multiple times and maybe a little bit faster it just wasn't enough volume for us, personally, to make the money that we're used to making by doing crowdfunding deals.

That said, in the future it's the way the future technology is gonna be. It's definitely going to be an aspect. It's not there yet. I think there may be one company out there that focuses more on the institutional investors doing it through the crowdfunding type of business or platform or technology-based platform, but right now it's not really there for the bigger deals.

Right now if you have a billion-dollar deal no one's going to invest over the internet. It still takes a bigger personal relationship. We don't have that click, like on Amazon, where you buy something so quickly it's too late. People aren't gonna do that when it's a billion-dollar deal. You still have that personal aspect of it which is what we thrive in and we like that.

Eventually it will become more technology-based but at the end of the day I don't think a huge deal will be getting done through the internet without a lot of relationships and personal interactions with the investors and the sponsors.

Obviously, the safer property types that investors are looking for is multifamily rentals. We're doing a few value-add multifamily rentals now in various parts of the country. Those deals pan out to mid to high teens and they're 14 to 18 percent - the returns they're expected to generate. If it's more of a core-ish type of multifamily you're in the low teens, say 12-percent IRR.

If it's a development deal it's 20+ percent IRR for multifamily. On hotel deals we're still seeing deals that are projected at 20-, to 25-percent returns because people view it as probably more that it's a riskier property type of the group; aside from condos, which are also a riskier aspect.

Some cities’ condo market is still very strong.  We're doing deals in Seattle and in California. It just still makes sense and those deals are making 25-percent IRRs and they're still selling. There's still velocity. The condos that get hurt the most in New York are really just the $10-million-plus condominiums; what they call, I guess, the Billionaire's Row in Manhattan, but there's still plenty of deals which are still happening today..

If you look at the price market, and the price per unit of a condo, today, the $1-, to $2-, to $3-million range, in New York, that's small. In the rest of the world, it's probably expensive, but, in New York, it's a small deal. There's still a lot of velocity for those type of deals. We're still getting deals done where the ultimate unit price is $1 to $3 million per unit because that still sells. $10 million units are harder to sell because it's a different market. That's the ones that are harder to capitalize unless you have a great project.

There are some great projects which are gonna have the $10 million and up units but  they're irreplaceable locations and they're one of a kind. The fringey deals; those are the harder ones to capitalize in New York. Outside of New York we're doing other condo deals in Seattle and California which are on the lower end of pricing and there's still buyers for those condos. 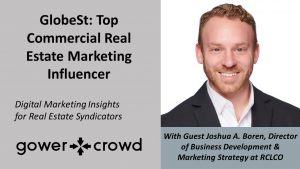