Sara Hanks is, was, a corporate and securities lawyer of thirty plus years before the financial crisis of 2008+ happened.  She was recruited by Senator Elizabeth Warren, who at the time was Chair of the Congressional Oversight Panel for the Troubled Asset Relief Program (TARP), a program set in place to put a floor under potential collapse of the financial system.  Sara started the week that the Dow Jones hit bottom although they did not know that until later.  After working on oversight issues on Capitol Hill, Sara became aware of all of the various pieces of legislation that eventually became the JOBS Act, and, while finding it of great interest, was also around folk at the American Bar Association who said things like, ‘oh my goodness, they're going to defraud my grandmother!’

Wanting to provide a solution to the defrauded grandmother problem, Sara started talking to a couple of friends she had come to know through the Congressional Oversight Panel and, together with them, set up a company to provide reassurance to people in crowdfunding that the companies were legitimate.

From that point the company expanded and now does all aspects of compliance for online capital raising. Whether it is under Regulations CF, Regulation D 506 (C) or regulation A. and although they did not initially found CrowdCheck as a law firm, because they were securities lawyers by background, people kept asking them securities law questions and they eventually started thinking that they could provide counsel on these matters also. They set up an in-house law firm and provide a complete legal disclosure compliance package for all aspects of JOBS Act type fundraising.

Attraction of the JOBS Act

It was the ability to democratize the capital raising process to permit everyday people to take control of their own financial lives that attracted Sara to the Act.  For early stage companies or projects, real estate included, sponsors could now not just go to people who they always go to for capital but could reach out using the Internet to a broader source of capital, giving people more investment opportunities. Its seemed like a good thing on both sides both for the company or project and for the investors providing it was done in a compliant way and providing that everybody knew what the risks involved were which is where Sara saw CrowdCheck coming in.

The easiest of the JOBS Act regulations to comply with is probably Reg D because there is really nothing there.  A sponsor is going out to accredited investors only under 506 (c) where, really, the only rules are do not lie and do not make misleading or fraudulent statements.  A sponsor still has information is presented in a way that new investors understand. Just because somebody is accredited does not mean that they necessarily understand what all the risks are and, from SEC studies, we know that there are some 12 million accredited households in the US, but that only half a million or so regularly invest as accredited investors. There is a big disconnect. There are some accredited folks who should not be investing in anything, and there is a whole new investor class out there who could but maybe do not understand what they are getting into when looking at a Regulation D offering. And the next level of complexity from a compliance and education perspective, is, of course Reg A where both accredited and non-accredited investors can invest alongside each other.

When the concept of crowd funding was introduced, the idea of an accredited investor was supposed to be a proxy for someone who either had experience or could buy experience. They were rich enough to be able to hand this over to a financial adviser and say ‘tell me, financial adviser, is this a good thing for me or not?’  It was always an incredibly blunt tool.  The SEC has recognized that for quite some time viz. that the mere owning of various sums of money or earning various sums of money does not necessarily mean that you are automatically able to make investment decisions. On the flip side some folk can be incredibly sophisticated people and yet not accredited, including many SEC staffers among them who are not accredited yet but could make just as good decisions. This could change as leadership at the SEC changes and it is possible that the definition of the accredited investor will probably be expanded at some point in the near future, and these changes could include, for example, adding a level of sophistication by reason of examination.  This could capture people who hold FINRA examinations, for example, or who have business experience as another possibility, irrespective of income or net worth.

Potential Changes to the Act

There is unlikely to be any major change to the JOBS Act, perhaps some minor chipping around the edges but to the extent anything goes really wrong then there could be some pulling back, but even that would take some time. First there would have to be the scandal, everybody would need to know about the scandal, and then there would have to be regulations passed to address them. For the foreseeable future, therefore, at most there will be minor fiddling with the edges of the various provisions of the JOBS Act.

What CrowdCheck does in the real estate space is really boring (!)  They do the corporate diligence to make sure that the entity that owns the property was properly organized and then the entity that is doing that is issuing the securities was properly organized and that the two of them have a relationship. The standard structure that seen in real estate is property-owning-company, which may be an LP Limited Partnership or it may be an LLC, and then the issuer which is issuing to the crowd, holds interest in the LP or else LLC holds the property.  CrowdCheck verifies that all of those are properly incorporated or organized and that they have authorized the issuance of the securities at both levels and what they very frequently find is that the paperwork around the property owning entity especially can be very sloppy.

For example limited partnership Number Four owns property Number Three, and the issuer saying they are selling interests in property Number Two. There is a tendency sometimes in real estate for successful sponsors to just pull out the last set of documents and mark them up.  Another area that they see is the use of cascading pyramids of limited liability companies all the way up because, of course, one of the things that they have to do is check that nobody who is a ‘bad actor’ is involved in the sponsor.

Sometimes they will see several different layers of LLCs which may have been used in order to disguise the fact that there is a bad actor involved who did not want to be disclosed. CrowdCheck’s rules are that they have to go all the way until they hit a human being or an incorporated company. Anyone who comes to us with a pyramid of LLCs will find that they just go through all of the these.

As important a protection as they are for investors, compliance services are not mandated and a lot of the platforms have very limited resources and they are not making a huge amount of money.  Compliance services are, therefore for many, a kind of a luxury to a certain extent although one could make the case that not being sued for sloppy paperwork is not a luxury. Indeed, soon after the JOBS Act was enacted, CrowdCheck probably was working with maybe 12 to 15 real estate platforms – but of those platforms only one or two of them still exist.  The biggest issue that the failed sites faced was one of deal flow; a lot of them had problems getting enough projects. If a site only got one or two sad looking condo complexes their platform, people are going to come along and see that they are the same deals that were there 12 months ago.

There were three companies involved in a series of discussions with the SEC. Two of them were real estate companies. Sara wrote an article, ‘the lemon squeezer’ article, which came out as a result of a fuller understanding of just how far the SEC would let people go when it came to high pressure, very flashy ads on TV or radio. The issue is that in Regulation A prior to qualification by the SEC – which is the point at which the SEC says no more comments you can go off and sell your securities now – until then an issuer is just trying to solicit interest. During the period up to qualification the issuer can advertise on TV and on the radio. You have to give a disclaimer which you can verbally say telling when the filing has been made with the SEC where that the offering document can be obtained. But until then, an issuer can do these very flashy ads that are almost startling to people with traditional securities backgrounds.

In short, prior to qualification once an issuer is qualified and allowed to take money, the rules change and the SEC says at that point you can only use methods of communication that include the delivery of the offering documentwhich of course you can do if you if you are online – but that cannot do on the TV or radio. So you cannot use TV and radio under present interpretations by the SEC to advertise your company or your real estate project. 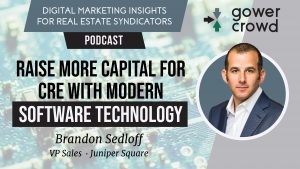 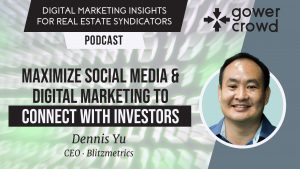 Last Updated on September 15, 2021 by Dr. Adam Gower Dennis Yu, CEO of Blitzmetrics How to Maximize Social Media and Digital Marketing to Connect with Investors NEW BOOK BY… 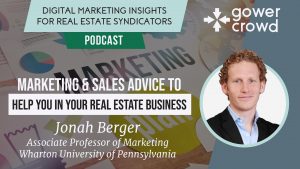 Last Updated on December 1, 2020 by Dr. Adam Gower Jonah Berger, Associate Professor of Marketing at Wharton University of Pennsylvania Marketing & Sales Advice to Help You in Your…