027 Commissions and Steering: The Inevitability of Disruption

... Sharing his own view again as a returning guest to the Forum, discusses three papers that examine the issue of agent steering clients from discount commission listings and the reasons why, even with more agents in the field, commission rates have not come down. Something is not functioning according to standard economic models of supply and demand and the result is that inflated commissions serve to sustain housing prices at higher levels than they need otherwise be. In an era marked by affordability problems and ever increasing home prices, artificially high commissions are anathema to free market economics. Technology will likely change that and organizations like the National Association of Realtors stand at the forefront of education and training so that everyone can benefit from the inevitability of the disruption that is coming to the industry. Dr. Wentland is a senior economist at the Bureau of Economic Analysis (BEA), a division of the Department of Commerce, a federal government agency. The opinions expressed in today’s podcast and in these shownotes are his own and do not reflect those of the federal government.

Non-discount brokers steer clients away from listings that have lower commissions or that are presented by discount brokers.  This conflict may be eroded as the availability of information becomes more ubiquitous and buyers insist on seeing all listed properties irrespective of commission factors.  Steering also occurs at the company level; maybe not as a course of policy, but certainly as a matter of fact.  Education and ethics training at the industry or regulatory level does not influence this kind of steering.  The responsibility lies, therefore, at the company level.

Agent productivity varies depending on level of experience, but reputation is the driving force behind how individuals and companies behave.  But how reputation measured?  A seller cannot know that an agent sold their house for less than they could have sold it for had they worked a little harder, for a little longer.  This might not be relevant, however, if the experience was positive to the Seller, that might be a sufficient factor driving their satisfaction and hence in the way they project the agent’s reputation to the market.

Commissions Must Come Down - Technology Dictates It

This does not tally, however, with the fact that in Europe and other markets where commission rates are significantly lower than they are in the United States, presumably there are similar levels of consumer satisfaction as there are in the States.  Something is artificially supporting these higher commission rates and one indicator of this is the behavior of agents as the market ebbs and flows.  As the market strengthens, there is an influx of new agents to the market because the barriers to entry are low.  As supply (of agents) goes up, why is it that price (commission) does not go down?  In any normal economic model this is what you would see.

What actually happens is that commission rates remains static and sales volume for experienced brokers is negatively impacted as novices enter the market and capture market share.  The consumer, of course, does not benefit but is a passive spectator to increasingly frenzied competition between brokers without any resulting reduction in commission rates and, hence, sales prices of homes.

As technology bridges the information asymmetry between buyers and agents conflict issues will become eroded because buyers will start to circumvent agents and go to sites such as Zillow where they can view homes and make offers all on the same platform without the need for an agent at all.

Gower:  The JOBS Act changed regulations enabling crowdsourcing sites to emerge to finance real estate deals.  These sites are intermediaries that go out and find developers who want finance for deals.  They search for local sponsors, on the other hand, and at the same time they advertise to Joe Public that for the first time in history you are going to be able to invest an amount that you can afford to lose in a deal that previously only institutional investors would have had access to.

So if you are a professional without enough capital to do bigger deals yourself, or simply were not in the network of the guys doing the deals, and you want to buy a hotel at the airport until the JOBS Act you just could not.  But now because we are able to crowd fund these things if you've got $25,000 or even $5,000 or even less, you can actually invest in that hotel and get the same kind of returns as the institutional investor.

Wentland:  Absolutely.  And it is better known outside of real estate where you are basically opening up your business opportunity for anybody to invest in however small.  And so you can imagine that this could just be a natural analog here where you have this kind of financing set up where you could buy a piece of development in the same ways you could buy a piece of Apple or Google, whether it's an equity stake or whether it's a debt stake in a bond market.  In effect it sounds like a similar thing, as you know, these new forms of public offerings are revolutionizing the way deals are financed. You open up this whole new stream of financing to the public in a way that just really changes everything.

Gower:  Yes but…  look at how banks behaved in the early part of the 20th century; an era during which, incidentally, income tax was considered unconstitutional.  The financiers of the day made huge amounts of money and paid no income tax.  They became known as the Robber Barons.  The one thing to watch for today is, and I don't want to be too glib about this, is what happened in the early 20th century could happen again here and it will be the fool who will be hurt at the end of the day.

In the early parts of the 20th century regulations had absolutely no requirement for any kind of corporate disclosure.  Banks could issue a stock or a bond and you would know nothing about it. Nothing.  And one of the primary reasons people invested was the reputation of the intermediary – the banker who sat between them and the issuer.  This was the key factor because you had nothing else to rely upon.  So if it was a reputable bank like J.P. Morgan or Kuhn Loeb, who became Lehman Brothers, people would invest.  But there was zero disclosure.  And then of course, as you know, a lot of power ended up in a few people's hands, and the so-called ‘money trust’ was broken up and eventually disclosure requirements were brought into law to protect the public.

Well hey guess what; the current state of the crowdfunded real estate environment requires very limited disclosures [at the crowdfund website level].  The intermediary has to disclose nothing material about the deals or their own performance.  How do you know what they are doing?  They sit in the middle. They take a commission and it's up to you to do your own due diligence. So at the end of the day my suspicion is that we will see this industry flushed out big time and a lot of pain during the next downturn.

Wentland:  That's fascinating. I think for the reasons that you just stated I recall reading something that Adam Smith in The Wealth of Nations had predicted; that the joint stock company wasn't really going to amount to much because of exactly the kinds of reasons that you are just talking about.  Because in those days there was little disclosure and it was very much buyer beware and people didn't really know much about what they were investing in.   And there had to be a lot of trust in who you were investing in.   And that was more or less what it was based on.  And then, as a result, you know the folks who are managing and running it have all these perverse incentives. And so you can imagine there's going to be some ups and downs with it. But my prediction would is probably somewhat similar to yours.  There might be a sort of gold rush mentality at first and then it'll get pulled back because people will lose a lot of money and then and then there'll be some reforms to it and tweaking with it and then it will evolve.

THE MORAL OF THE STORY:  Great opportunity for investors and sponsors alike, but pitfalls abound.  Sign up at the National Real Estate Forum and we will provide you with the tools and guidance to succeed in the new world of crowd fund real estate. 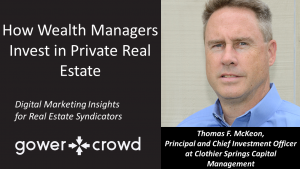 NEW BOOK BY ADAM GOWER PH.D. A BRAND NEW WAY TO FINANCE REAL ESTATE …No matter how many investors you have or how many deals you’ve done before. Learn More…